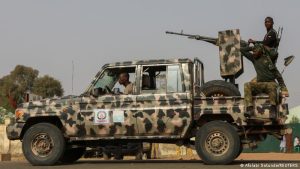 Investigation carried out by DAILY POST revealed that the people of the district have deserted the entire area following incessant terror attacks by the men of the underworld.

This medium reports that at the roadside between Kotorkoshi and Mada town, many villagers were now refugees, erecting their tents along the road because the bandits have overpowered the security operatives.

According to one Mallan Ibrahim Mada, “we have not taken our baths for some days now because the notorious bandits have hijacked the entire area as they have overpowered the security operatives.

“As I am talking to you now, I don’t know the whereabouts of my two wives and children and I don’t know whether they have been kidnapped or they escaped to another area.

“We have no other means of livelihood except farming but we have been banned from our farming activities by bandits. The only wife and children with me now have entered Kotorkoshi village to beg for food for us to survive.”

Reports said that the commissioner of information, Hon. Ibrahim Magaji Dosara and that of Security and Internal Affairs confirmed that Mada district have been witnessing incessant terror attacks.

They spoke during their recent press briefing in Gusau, the State capital.

They admitted that the escalating rate of banditry activities in the axis had forced the State government to shut down all the markets and filling stations in the affected areas.

“The State government is aware of the plight of the people due to banditry activities bedeviling the entire area; we, therefore, decided to shut down all the markets and filling stations to reduce the incessant terror attacks in the axis.