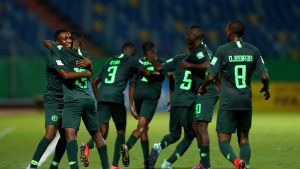 Nigeria’s Golden Eaglets are through to semi-final of the WAFU B U-17 Championship after a 3-1 win against Togo in their second Group A game at the Cape Coast Stadium on Tuesday night.

Kevwe Iyede and Precious Williams scored for the Golden Eaglets in the first half.

Togo reduced the deficit from a sublime free kick in the 72nd minute.

Williams and Eke have now scored two goals each for the Golden Eaglets in the competition.

Nduka Ugbade’s side top Group A with six points from two matches.

The Eaglets will face the second-placed team in Group B in the semi-final.