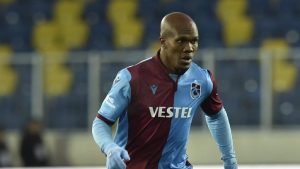 Nwakaeme, according to Urfayazar.com, penned a two-year contract with an option of another year.

The striker recently severed ties with Turkish Super Lig champions, Trabzonspor after failing to reach an agreement on a new contract.

Turkish giants, Besiktas and Fenerbahce were also interested in his services, but he has opted for the lucrative Saudi mega offer.

Nwakaeme scored 47 goals and recorded 40 assists during his time with Trabzonspor.

He won the Turkish League title in his final season at the club.