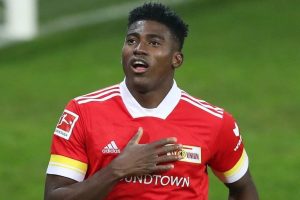 Union Berlin value him around £20, but have now agreed for a slightly lesser fee with Nottingham Forest according to TalkSport.com.

Last season, he netted 20 goals and provided five assists in 42 appearances for Union Berlin to qualify to play in the UEFA Europa Conference League again next season

Awoniyi joined Liverpool in 2015 and had loan spells at six different clubs without making the breakthrough at Anfield.

The 24-year-old joined Union Berlin on a permanent deal last summer after previously spending time on loan at the capital club.

He is now set to be Forest’s first signing this summer as they get set for a return to the English top flight after many years in the lower leagues.