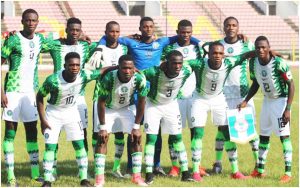 Champions Nigeria and Cote d’iVoire dominated the team of the tournament of the recently concluded WAFU B U-20 Championship hosted by Niger Republic.

The Flying Eagles and the Young Elephants have three players each on the Dream X1.

Goalkeeper Nathaniel Nwosu, midfielder Daniel Daga and forward Ibrahim Muhammad were rewarded for their exemplary displays during the competition.

Nwosu, who stood out among the other goalkeepers in Niamey, made a number of important saves in Nigeria’s four games.

Daga was named man of the match in Nigeria’s 2-2 draw against Burkina Faso and the hard-fought 2-1 semi-final win against Cote d’ivoire.

Muhammad got his reward after netting twice for the Flying Eagles in the competition.

Benin Republic and Burkina Faso contributed two players each, while hosts Niger Republic had one player on the list.

The Flying Eagles defeated the Young Squirrels of Benin 3-1 in the final at the Stade General Seyni Kountche last Sunday.