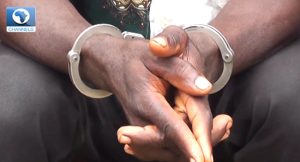 A yet to be identified officer attached to the Kano Command of the Nigerian Correctional Service, has reportedly shot dead a trader over a stick of cigarette.

“This made the officer bring out his gun. The bullet that was fired at the trader went through his stomach and hit another person on his leg. Instantly he shot him again. The victim was thereafter rushed to Murtala Muhammad Specialist Hospital in Kano.

“With the look of things the trader cannot survive it. Because some white substance is coming out from his mouth and nose,” the source said.

Command of the Nigerian Correctional Service said the officer involved has since been arrested and a panel set up to investigate the circumstances surrounding the ugly incident.

A statement by the Command’s Public Relations Officer, DSC Musbahu Lawan Kofar-Naisa said the incident occurred as a result of accidental discharge.

“The Kano State Command of the Nigerian Correctional Service wishes to confirm the unfortunate incident of accidental discharge, which led to the death of a vendor and another injured within the vicinity of the Goron Dutse Medium Security Custodial Centre.

“The officer involved, on the order of the state Controller of Corrections, was immediately arrested and a panel set up to investigate the circumstances surrounding the ugly incident.

“While expressing his condolences to the family members of the deceased, the Controller prayed to God Almighty for the repose of the soul of the departed and speedy recovery of the injured.

“He assured that the case will be duly investigated and appropriate action is taken according to the provisions of the law stating that the Service maintains zero tolerance for indiscipline and any form of recklessness,” the CPRO, DSC Kofar-Naisa however stated.