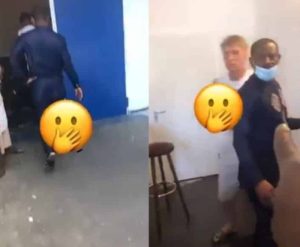 A dramatic scene ensued after a Ghanaian man stormed a church in Germany to confront its Pastor for allegedly sleeping with his wife.

The Ghanaian cleric who was confronted, is said to be the lead Pastor at the Faith Pentecostal Ministries in Frankfurt.

The visibly angry man disrupted the church service and also accused the Pastor of hiding behind the cloak of doing God’s work to sleep with his wife.

The altercation was captured on camera and some church members were also seen shielding the pastor from embarrassment.

The pastor was swift to avoid the camera as he took refuge in a closed room.

Watch the video below:-