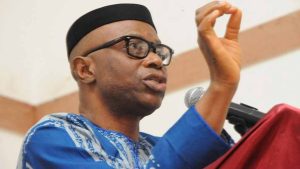 According to Mimiko in a statement issued by John Paul Akinduro, his Special Assistant on Media and Digital Communications, the Owo atrocity is a condemnable conduct that confronts humanity and bludgeons all senses.

The former governor also urged the State government to take “prompt action to mobilize all available healthcare assets to Owo and, if necessary, seek aid from neighboring States in order to save as many of those who were injured in the attack.”

He also urged the authorities to apprehend and prosecute the perpetrators of the heinous crime right now.

Mimiko expressed his condolences to the government and people of Ondo State, the Kingdom of Owo, the Catholic Diocese of Ondo, and the victims’ families.

He asserted that he is in solidarity with the Ondo State Government and the people of Owo in condemning the attack in its entirety.

Mimiko also urged residents to be alert and vigilant so as to nip any illegality and such attack in the bud.