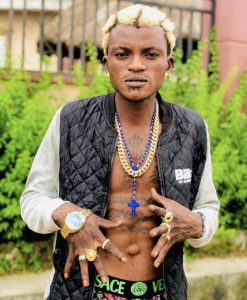 Fast-rising singer, Portable is calling out Wizkid and Burna Boy’s Dancer, Poco Lee for stealing the dollars Wizkid sprayed him.

Recall that Olamide, Portable and Poco Lee performed Zazoo Zeh at the Livespot event. You would also recall how Wizkid made it rain on Portable as he vibed to the Zazu sound and how Poco Lee was diligently picking the dollars being sprayed.

This morning, Portable took to the Tik Tok app to call out Poco Lee for ripping him off.

According to the Zazu Crooner, Wizkid sprayed him a total of #3,000 but Poco Lee gave him $600.  He emphasised the fact that Wizkid sprayed them $100 Dollar bills and  he is certain the total is $3000

Portable revealed that he has tried reaching Poco lee to ask for the remaining money, but he gave him stories about him being an international show promoter and is supposed to get his cut of the money.

Portable also revealed that Poco Lee stole his hit song, Zazu from him. According to him, Poco Lee kept his name first and made it look like he featured Portable and Olamide

Watch the video below;