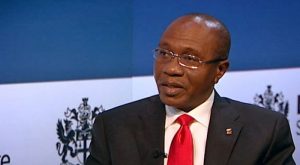 The Governor of the Central Bank Of Nigeria (CBN), Godwin Emefiele, on Saturday said that Nigeria can’t afford to operate a floated exchange rate system despite advice from the World Bank and other global financial institutions.

The CBN Governor disclosed this while speaking at the IMF/World Bank Spring Meetings in Washington DC, United States.

Emefiele had stated this while reacting to the call by the World Bank Group President, David Malpass calling on Nigeria to stick to a single exchange rate policy.

According to the CBN Governor, different countries are faced with diverse economic issues and would tackle them differently.

“Both the IMF and World Bank are our prime development banks, and we have received support from them at different times in resolving some of our economic challenges, particularly bordering on finance.

“Nigeria’s situation is very peculiar and that is why we have continued to engage the IMF and World Bank to show understanding of our local problems.

Emefiele in his statement revealed why there is high demand for forex on certain goods which gulped up a significant fraction of Nigeria’s foreign exchange.

He said this informed the Federal Government’s decision to suspend forex access for the importation of rice, wheat, and other consumables.

“We are doing everything possible to restructure the base of the economy through some of the policies that we have put in place to deepen the production of goods in Nigeria.”