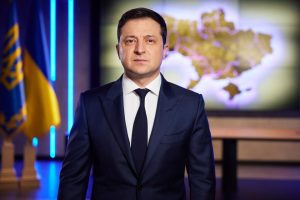 Ukrainian President, Volodymyr Zelensky has said his government appreciates the new defense aid package it got from the United States and President Joe Biden amid the ongoing war between Ukraine and Russia.

Zelensky said that the new power arms would save the lives of Ukrainian soldiers and speed up the liberation of Ukraine’s lands from the Russian aggressor.

“Ukraine government officialThank you @POTUS for the new defense aid package for Ukraine.

“Critically important, powerful arms will save our soldiers’ lives, speed up the liberation of our land from the Russian aggressor.

“I appreciate the strategic friendship between our nations. Together to victory!” Zelensky tweeted.

Ukraine and Russia have been fighting for almost five months.

As of today, several casualties have already been recorded due to the war.