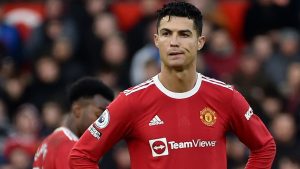 Cristiano Ronaldo’s agent, Jorge Mendes, is doing everything possible to ensure the player leaves Manchester United for LaLiga this summer, according to reports.

Ronaldo is desperate to continue playing at the top level and winning trophies.

The 37-year-old does not want to continue at United, who will be playing in the Europa League in Erik ten Hag’s first season in charge.

Chelsea, Bayern Munich and Real Madrid have all ruled themselves out of the running for Ronaldo.

The trio of clubs believe the Portugal captain would not fit into their wage structure or plans for the future.

But radio station El Lageuro (via Sports Illustrated) claim Mendes believes a transfer to Atletico Madrid can still go through.

As the issue is simply economic, the super agent feels it can be “fixed” with necessary negotiations.

Mendes is expecting Atletico will allow a few players to leave in the next month or so. This will free up space on the wage bill for Ronaldo to join.