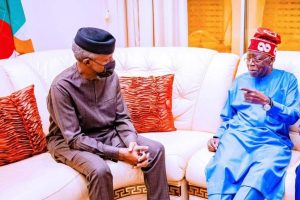 The APC leader met with Osinbajo at the VP’s residence within Aso Villa in Abuja.

The meeting followed the presidential primary which took place on Wednesday.

Osinbajo served as Lagos Commissioner for Justice and Attorney General when Tinubu was governor.

The flagbearer defeated Minister of Transportation, Rotimi Amaechi and Osinbajo to win the party’s ticket.

Tinubu will slug it out next February against former Vice President Atiku Abubakar.

Atiku dumped the Peoples Democratic Party, PDP, and ran for the presidency in 2007 under the Action Congress of Nigeria (ACN) led by Tinubu.

In March, he disclosed that the APC candidate wanted to be his running mate in that election.

“He (Tinubu) gave me a set of conditions for giving me the ticket, one of which was that I should make him the Vice President.

“I said ‘No, I’m not going to make you Vice President’ instead, I took Senator Ben Obi”, the Wazirin Adamawa said.