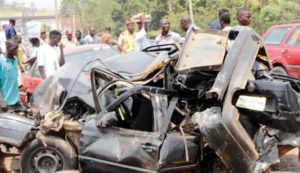 An accident, involving a bus and BUA Cement trailer claimed 22 lives along Kaduna-Abuja road on Tuesday

An eyewitness, told 247ariya that the bus crashed into a stationary BUA trailer loaded with cements and immediately went up in flames.

Confirming the accident, the Kaduna Sector Commander of the Federal Road Safety Commission (FRSC), Hafiz Muhammad said they suspected fatigue on the side of the driver as the commuters were coming from a night journey.

He said the bus crashed into a BUA Cement trailer and then went up in flames.

According to him, 22 people were on the bus, among them 17 male adults, 2 women and a minor.

“They said the trailer was parked when the bus went under it. It was terrible. We always caution bus drivers against night journeys,”

Although he admitted that there was no law against night journeys, the FRSC boss said, “It is very risky because most of the accidents recorded along that route are due to night journeys.”