‘Objectophilia’ is a bizzarre sexual obsession. Its a situation where Individuals are attracted to inanimate objects.
Some motorists in Czech Republic are on the lookout for a man who has been caught on camera having sex with their ‘cars’.

CCTV footage released shows the man getting intimate with a parked vehicle, ‘Blue skoda’. The man approaches the vehicle in an enclosed car park in the city of Pilsen and insets his erect penis into the petrol cap. After apparently satisfying himself, he then walks away as if nothing happened. 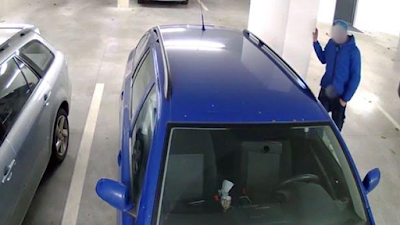 Local media has branded the man a “car rapist” amid reports that it’s not the first time he has targeted parked cars. The owner of the car that was ‘raped’  said he felt aggrieved about the incident.

“This pervert also ‘raped’ my neighbour’s Mazda but my Octavia turns him on more. He goes there like it’s a brothel, ” he reportedly exclaimed.