A statement by the police command states that others arrested alongside these two culprits are 28 year old Samuel Nwala, Lucky Ukwuoma ‘M’26 years and Kaale Taagabah ‘M’ 27 years. 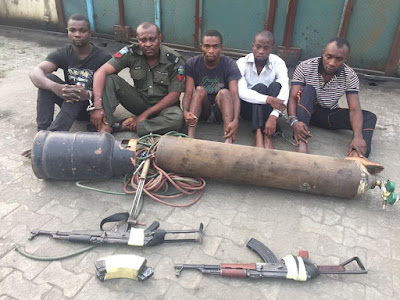 According to the statement, on the 22nd of December 2016, the five (5) suspects mentioned above and others still at large, stormed a Branch of the Bank in Port Harcourt, relying on information and active involvement of one of the staff of the Bank. The armed robbers successfully broke down the well fortified security doors and barriers and took over the banking hall.

They were almost pulling down the vault of the Bank and other strong rooms in the bank with use of gas cylinder welding machine and iron cutters before the joint Police Teams of IGP’S Intelligence Response Team and Policemen from Rivers state Police Command swiftly moved in and dislodged them, thereby foiled the armed robbery attack on the Bank and made a prompt arrest of three (3) of the suspects at the scene namely Samuel Nwala, Lucky Ukwuoma, and Kaale Taagabah.

In the course of thorough investigation into the foiled armed robbery attack on the Bank, the principal suspect who is a staff of the Bank and the master mind of the armed robber attack was subsequently arrested based on the confessional statements volunteered by the last three suspects arrested at the scene. The arrest of the principal suspect led to the arrest of Ex SGT Promise Ukwuoma who participated actively in the armed robbery attack on the Bank. The two (2) AK 47 riffles and the ammunition were recovered from him.

All the suspects have volunteered confessional and useful statements to the Police about the various criminal roles they played in the commission of the crime.