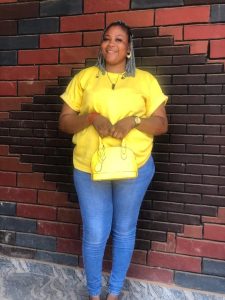 They say it takes a village to raise a child, we can also say that when it comes to producing a film. As we know, lots of personnel are responsible for any film’s overall success. Asides, the writers who create the story, and the directors who interprets it creatively, the role of the costume designer is also essential in telling a story. A costume designer is a person who designs costumes for a film.

They are responsible for designing the costumes for a production, making sure they match the time period, style and Director’s vision for the piece, as well as being practical for the Performer.

Osayamen Lilian Priye is one of the most in-demand costume designers in the industry. Unknown to many, she’s the stylist behind many of our favorite characters’ fabulous outfits. Aside from costuming for films, she also design costumes for stage plays and music videos.

Stylist Lilian as she’s fondly called by friends and colleagues is an hot cake in the Nigeria film industry refereed to as Nollywood. Although dominantly working on Epic movies she’s worked on several blockbuster films. She’s a true costumier in the sense that her ability to create theatrical costumes if need be. She’s not limited to styling mellow drama films.

Osayamen Lilian Priye who recently branched into the Local Benin film industry says she did that as a tribute to her motherland and also a way of giving back to the industry who has also given her a lot because it all began here before the big fame came.

She has also disclose her plans to set up a costume designing workshop as part of giving back. It’s inspiring to discover overlooked talents in the industry, every department/crew member deserves some form of recognition for their contribution to filmmaking and here we are giving Osayamen Lilian Priye her flowers. We say well done Ma