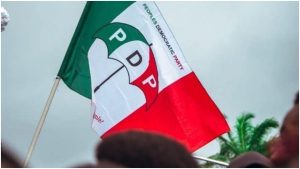 A House of Representatives aspirant in Lagos, Mr Babatunde Aleshinloye-Williams, has said there were no primary elections held by the Peoples Democratic Party (PDP) in the state on Sunday.

DAILY POST reports that the PDP conducted its House of Assembly and House of Representatives primary elections on Sunday, May 22.

But Aleshinloye-Williams, who is contesting for Somolu Federal Constituency described the primaries conducted at the Somolu Secretariat of the PDP in Lagos as illegal, saying it was “a fraudulent sham that cannot stand, and should be disregarded.”

According to the aspirant, “the Lagos State PDP has not only canceled yesterday’s primaries, but urged the National working committee, NWC of the party to re-schedule it.”

He said the Lagos State chapter of the PDP had urged the party’s National Working Committee (NWC) to cancel the House of Assembly and House of Representatives primaries slated for Sunday in Lagos because “the ad-hoc delegates lists brought by the party’s electoral committees for both primaries had been compromised.”

However, Aleshinloye-Williams, who said he was invited to the party secretariat to discuss modalities for the election, where he had intended to tell the LGA chairman that the PDP State executives had postponed the election, stated that he was shocked to see that the election was well on the way, and almost completed.

He said, “the whole process amounts to nullity” as he was not part of what he termed an electoral fraud, which he said was against the directives of the Lagos State PDP, stressing that the whole process was null and void.

The House of Representatives hopeful wondered how any legal primary election could be conducted without the proper delegates list and the national electoral committee, especially when the state PDP had postponed the exercise.

He said the exercise was fraudulent, illegal and a sham that must be disregarded, saying the election never took place as far as he was concerned.

Aleshinloye-Williams urged his supporters and party faithful to stay focused and wait for the state’s directives on the said primary elections.