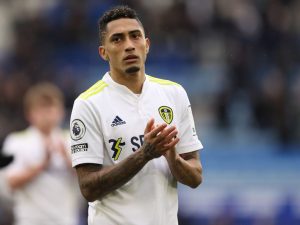 Leeds United have left Raphinha out of their squad for a pre-season tour.

The Brazilian has long been linked with a move away, with Barcelona and Chelsea battling for his signature.

The Blues have reportedly agreed a fee for Raphinha, but the player is biding his time to see if the LaLiga giants make a move.

As that wait continues, Leeds have decided to leave Raphinha behind as they prepare to fly to Australia.

“The remainder of the squad not travelling to Australia will continue pre-season preparations at Thorp Arch,” an official club statement read, alongside a squad list that excluded Raphinha.