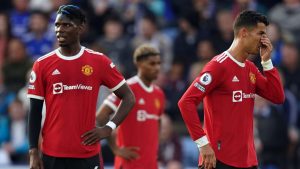 United have held the end-of-season award ceremony for more than a decade.

During the event, the club’s outstanding players at first-team and youth level are rewarded for an impressive season.

The gala dinner, which is always held at Old Trafford, is usually scheduled for the final fortnight of the season, but has not gone ahead this year.

It is understood United’s players were too embarrassed to hold the black-tie event, broadcast by the MUTV, the club’s in-house TV station, following such a dismal campaign.

United will finish outside the top five in the league and will not play in the Champions League next season.

The season of turmoil saw Ole Gunnar Solskjaer fired last November and replaced by Ralf Rangnick on an interim basis, although his spell has proved just as disastrous.