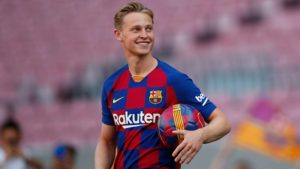 Barcelona midfielder, Frenkie de Jong, has made a U-turn on joining Manchester United this summer.

De Jong is now ready to join Manchester United this summer after giving the move the green light.

The Netherlands international is Man United manager Erik ten Hag’s top transfer target, but his immediate preference was to remain at Barcelona.

Barcelona are prepared to sell the 25-year-old; however, the Catalan club is under extreme financial pressure to cash in on one of its prized assets.

However, according to SPORT, De Jong has said ‘OK’ to joining Man United despite the Red Devils being unable to offer him Champions League football next season.

De Jong has privately admitted he is ready to join the Premier League giants after initial doubts.

His representatives had hoped for offers from Bayern Munich, Paris Saint-Germain or Manchester City, but those clubs have been deterred by Barcelona’s valuation.

Man United are now looking to agree to a fee with Barcelona for De Jong’s signature.

Barcelona could demand €60million plus €20million in add-ons from Man United for De Jong.