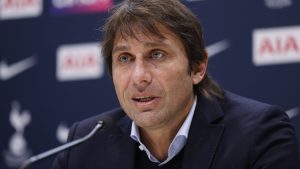 Tottenham Hotspur manager, Antonio Conte has hinted he could still leave the club despite securing Champions League for next season.

A 5-0 win over Norwich on Sunday, ensured that Spurs finished in fourth place above rivals, Arsenal.

However, after the game at Carrow Road, Conte spoke about his “ambition” and said he needed to sit down and talk with the club’s hierarchy over their summer plans.

Conte is believed to be seeking as many as six new faces ahead of next season in an ambitious overhaul, aiming to turn Tottenham into Premier League title contenders.

The Italian tactician will sit down with chairman, Daniel Levy and managing director, Fabio Paratici in a few days to discuss their transfer strategy.

He said: “I am under contract until next summer you know very well I signed for one year and seven months. I enjoyed a lot, my time in Tottenham, because for me it was a big challenge to come in during the season,” he said.

“For a coach like me, it is not simple. It is a big challenge in a club with a fantastic stadium and a training ground and I knew the situation I could find — to give me the opportunity to work in the way I want.

“On the other hand, you know very well that I am a person who has ambition. I like to fight for something important, I like to fight to lift a trophy. For me, this is a trophy and I am very happy. And then we will see.

“I always said to you at the end of the season, we speak with the club and find the best solution for me and for the club. Now I think for me, the club, the players it is good to have three, four, five days’ rest and then the mind will be very clear. You can consider the whole season.

“You have to be very calm before speaking because now [there are] a lot of emotions in my mind, my heart. For this reason it would be very good to rest and then have a good meeting with the club to find the best possible solution.”