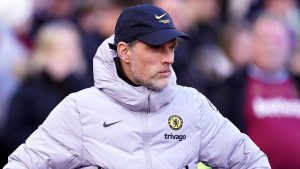 Chelsea manager, Thomas Tuchel is looking to shake up his playing squad ahead of the 2022/2023 season.

Now that the UK Government has finally approved Todd Boehly consortium’s £4.25bn takeover, the Blues can now begin planning ahead.

Boehly is confident he can bring at least one statement signing to the club, but Tuchel wants much, the UK Mirror reports.

Antonio Rudiger and Andreas Christensen will both depart as free agents. Marcos Alonso and even club captain Cesar Azpilicueta could join them through the exit.

Chelsea are expected to bid for Sevilla defender, Jules Kounde, within days. He is likely to cost more than £50m, and while Tuchel could have up to £200m to spend this summer, he must sell players to reach that figure.

It is a tricky balancing act because the German wants to improve his squad without losing too many players.

But if he wants to make a truly big splash this summer then Chelsea will have to listen to offers for the likes of Ross Barkley, Ruben Loftus-Cheek, Christian Pulisic and Hakim Ziyech.

Question marks remain too over Timo Werner and Romelu Lukaku – expensive signings who have not worked out and will not fetch the same huge fees if sold.