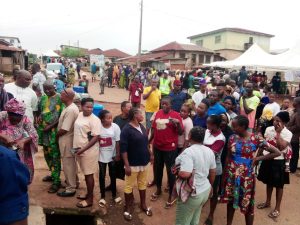 Mr. Paul James, an Election observer in Ekiti State, from YIAGA, has insisted that people sold their votes during Saturday’s governorship election for as low as N500.

James told the BBC Hausa Service on Saturday that from March 2022 till date, money and other items were given to people during political occasions.

According to him, it has now changed as they now go from house to house, giving people money.

James said, “What this has shown is that politicians don’t like wasting time campaigning, what they now do is to buy people’s votes.”

The election observer said it was not only one political party that does that, adding that it’s so disheartening that they “buy people’s vote for as low as N500.”

However, an INEC official Hajiya Zainab Aminu told the BBC Hausa that they have taken steps to deal with the problem.

Aminu said it is not permissible for people to use phones or snap pictures when they come to cast their vote at the polling stations.

According to her, people used to snap what they voted for and show it afterwards so as to collect money.

She added that the Commission was working together with the Economic and Financial Crimes Commission (EFCC) and the Independent Corrupt Practices and Other Related Offences Commission (ICPC) so as to apprehend those who flout the election rules and get them punished in accordance with the offence they committed. Incidences of vote-buying have been recorded in many polling centres in the ongoing governorship election in Ekiti.

Concerned individuals, who are also voters, said some persons believed to be working for politicians suddenly arrived at various polling centres on Saturday to offer money to those already in the queue, with the intention of inducing them with cash.

They, however, said such offers were not done in the open, as it used to be in the past, apparently to avoid the attention of eagle-eyed security men on duty, as a prospective voter would just be quietly invited to a corner, a little far away from the voting unit, to collect money.