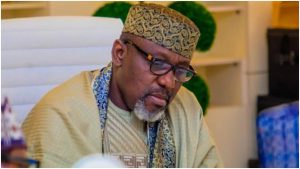 The camp of former Imo Governor, Rochas Okorocha believes his arrest by the Economic and Financial Crimes Commission (EFCC) is political.

The Senator representing lmo West District is being prosecuted for charges, including diversion of State funds.

On Tuesday, EFCC officials and security agents stormed his residence in the capital of Nigeria, Abuja, and took him after breaking in.

But his spokesman, Sam Onwuemeodo questioned why the arrest coincided with the All Progressives Congress (APC) screening for presidential aspirants.

In a statement, the aide noted that those who had sworn to frustrate Okorocha’s ambition have not relented.

Onwuemeodo said the apprehension occasioned his principal’s demand for a warrant of arrest or court order from the anti-graft agency.

“None was provided. The security personnel finally employed force to arrest Okorocha, without any warrant or court order. If there was any, it could also be made public”, he wrote.

Onwuemeodo recalled that on the day Okorocha declared to run for the office of President, the EFCC invaded the venue to arrest him.

“They claimed they had come to arrest Okorocha and arraign him even when he had not been served. The general outcry by the public saved the situation,” he said.

He said the latest event occurred less than 48 hours after the lawmaker hosted the meeting of APC presidential aspirants from the South-East.

Onwuemeodo warned that if Okorocha is blocked from his bid, over a matter he is deemed innocent until proved otherwise, “it won’t be a nice story for history and posterity.

“We have refused to believe some valid pieces of information at our disposal, on those working to stop Okorocha from exercising his constitutional right.

“The reason for our doubt is that Okorocha has not done anything to warrant such onslaught.”

He stressed that the ex-governor has “sacrificed a lot for Nigeria”, thus stopping his quest for the presidency “would be most uncharitable and very unfortunate”.

The statement further advised the EFCC to avoid “strange hands” in its operations.

“We are yet to detach politics from Okorocha’s ordeal. The commission should not abort Okorocha’s presidential ambition. Let the APC delegates or Nigerians do that”, Onwuemeodo added.