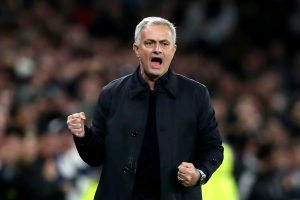 Mourinho says he has no plans to leave AS Roma after winning the Europa Conference League with the Italian club on Wednesday night.

Mourinho, who was rumoured to be desirous of new challenges elsewhere, says he is already looking to next season with the Europa Conference League champions.

Mourinho ended Roma’s 14-year wait for a trophy and also made history as the first manager to win all of Uefa’s major European trophies.

He has already won the Champions League, Europa League and Uefa Cup. The only goal of the match came in the first half through Nicolo Zaniolo.

“Now I am staying, there are no doubts,” Mourinho told his post-match press conference after the game, adding, “even if some rumours emerge, I only want to remain at Roma

“We must understand what our owners, who are fantastic people, want to do next season, because this is history, but we can build a really strong project with honest professionals.

“Of course I feel like a Romanista, but that might be my way of working. I am a Porto fan, an Inter fan, a Chelsea fan, I am crazy about Real Madrid, I am now a Roma fan, I belong to all those clubs because we had these moments together.”