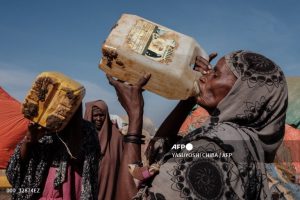 The United Nations warned on Tuesday that twenty million people could be at risk of starvation this year as delayed rains worsened an already brutal drought in Kenya, Somalia, and Ethiopia.

A months-long drought had left the Horn of Africa on the verge of a humanitarian catastrophe, destroying crops and livestock and forcing huge numbers of people to leave their homes in search of food and water.

As long-awaited rains failed to materialise nearly a month into the current rainy season, “the number of hungry people due to drought could spiral from the currently estimated 14 million to 20 million through 2022,” the United Nations World Food Programme said.

The WFP said that, if current conditions prevailed, six million Somalis, or 40 percent of the population would be facing extreme levels of food insecurity and there would be a very real risk of famine in the coming months.

In Kenya, half a million people were on the brink of a hunger crisis, with communities in the north of the country, especially at risk due to their reliance on livestock.

The number of Kenyans in need of assistance had risen more than fourfold in less than two years, the agency noted.

Malnutrition rates in drought-hit southern and southeastern Ethiopia had surged above emergency thresholds, while the north of the country had been in the grip of a 17-month war between government forces and Tigrayan rebels.

“Parts of the drought-hit Horn of Africa region were already reeling from the effects of ongoing conflict, poverty, and a locust invasion,” the UN’s Food and Agriculture Organization also said on Tuesday.

“We must act now if we want to prevent a humanitarian catastrophe,” FAO’s representative to the African Union, Chimimba David Phiri, told a UN briefing in Geneva.

“The dire conditions had been exacerbated by the conflict in Ukraine, which had contributed to soaring food and fuel costs and disrupted global supply chains,” the WFP said.

The agency warned that a lack of funding could spell disaster, calling for $473 million (438 million euros) over the next six months.

Experts, however, have said that extreme weather events are happening with increased frequency and intensity due to climate change.