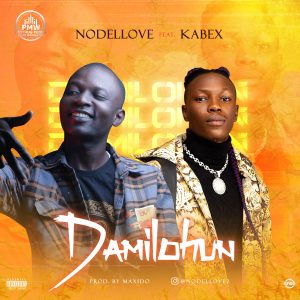 Bent on establishing himself as a top-notch Afro-beat act in the music industry, talented and fast- rising Singer, Idoghor Nodel John, who goes by the stage name, Nodellove, drops his new single titled, “Damiloun.” Which he featured Kabex.
Nodellove who is currently in the studio working on his EP to satisfy the craving of his fans teamed up with trending Indigenous Rapper, Kabex to deliver the song, Damiloun, an inspirational song which promises to be a smashing hit single.