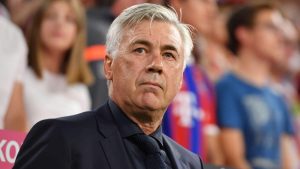 Ancelotti secured the LaLiga title in April and has been able to rest key players like Karim Benzema and Luka Modrid.

However, the Reds are still in an intense Premier League title race with Manchester City.

Liverpool are one point behind Pep Guardiola’s men going into the final week of the campaign.

“Liverpool have had more difficulties than us, playing important matches

“We have had more time to think about it, but in the end I don’t think it will affect the teams,” Ancelotti said.