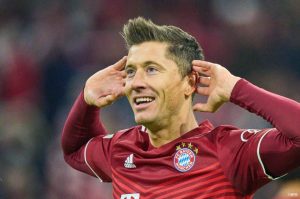 Bayern Munich wants at least €60m (£52m) if they are to sell striker Robert Lewandowski to Barcelona, Sky Sports reports.

Earlier this week, Barcelona made a €40m (£34.4m) offer to sign Lewandowski but Bayern insisted the Poland international was not for sale, even though he has only a year left on his contract.

Lewandowski had last month told Bayern he wants to leave the club this summer and would not extend his contract beyond the end of the 2022/23 season.

The 33-year-old would like to move to Barcelona this summer rather than wait to become a free agent.

Meanwhile, Oliver Kahn, Bayern Munich’s chief executive, had since revealed that the 2021 FIFA World Best player would not be leaving the Allianz Arena this summer.

“We would be stupid to sell a player who scores 30 to 40 goals per season,” Kahn said.

“He has a contract until June 2023 and we will definitely have him with us for another season.”