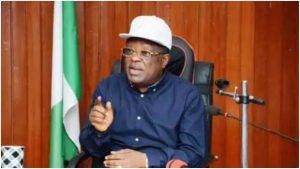 An All Progressives Congress, APC, presidential aspirant, Dave Umahi, has dismissed claims of stepping ahead of the party’s convention.

Umahi said his detractors were behind the false reports of him stepping down from the presidential race.

Appearing on Channels Television, the Ebonyi State Governor, insisted that he’s the candidate to beat during the APC convention.

“This is the third time that the media would report that I have stepped down and that shows some people are frightened by my candidacy,” Umahi said.

He dismissed the insinuation that some aspirants are more qualified than others, saying the party didn’t set any criteria for aspirants.

“The party didn’t set any criteria for aspirants. So, I’m surprised when people say one person is a super candidate.

“Nigerians will not be asking how much money you have but how much you have done for the country,” he said.