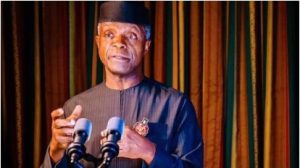 Vice President Yemi Osinbajo has said he lost the battle, but not the war, following his defeat in the All Progressives Congress (APC) presidential primary to former Lagos State Governor, Asiwaju Bola Tinubu.

Osinbajo, however, insisted, he remains committed to the dream of a new Nigeria.

He stated this while speaking at the campaign office of The Progressive Project (TPP) in Abuja on Friday.

The Vice President also vowed to support Tinubu during next year’s election.

“This movement is a movement within a party also, we are not doing something that has not been heard of before.

“What is new is that we have a firm belief that a new Nigeria is possible and it is possible through us who are here.

He added that “the dream of a new country remains alive and well… We will have at the back of our minds, that what you have started in the various movements, coming into one, is the seed that will birth a new nation. You and I know the time has come and we will devote everything to it.”