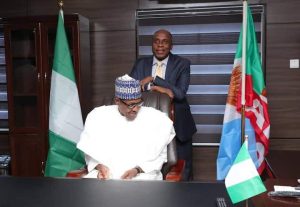 Rotimi Amaechi has, without doubt, won the heart of Governor Nasir El-Rufai ahead of the APC presidential primary In fact, the Kaduna governor told APC delegates in the state on Sunday, May 15, that the transportation minister is his number one confidant El-Rufai also told the delegates that President Buhari is very fond of Amaechi after he funded the CPC’s convention back in 2011.

The minister of transportation, Rotimi Amaechi, who is also a presidential aspirant on the platform of the All Progressives Congress (APC) has been described as President Muhammadu Buhari’s confidant and loyalist. This was the position of Governor Nasir El-Rufai on Sunday, May 15, when Amaechi paid him and APC delegates in Kaduna a visit as part of his consultation for his presidential bid, Vanguard reports.

He noted that since then, the president has been fond of the minister and asked him (El-Rufai) to keep in touch with him.

Speaking to the delegates on Amaechi’s behalf, the governor revealed: “Let me tell you people something, in 2011 when we were in CPC, we were to go to convention and we didn’t have money. Amaechi then was governor of Rivers State under the PDP., I don’t know how he got to know, then he asked how much was needed to hold the convention, and he gave the money. It was the money we used to organise the 2011 convention.

“Since then, President Muhammadu Buhari asked me to continue talking to him. When they were meeting, thinking of defecting to APC, we used to meet with the seven governors before two chickened out. ”Amaechi turned his back against his own neighbour, Goodluck Jonathan and said he was going to follow Buhari. He held on to that trust, that is why Daura Emirate gave him that title of Dan Amanan Daura. “We are followers of Buhari. It is what he tells us that we do. So, here is my friend and Buhari’s loyalist, what are you going to do? You should know, after today’s discussion, there are going to be discussions.

Amaechi is my friend, El-Rufai says He also recalled how the minister came swiftly to his rescue back in the past when he was looked for by the Department of State Service (DSS).

His words: “There was a time I was in the opposition, the DSS was looking for me, they wanted to arrest me. Amaechi told me where to go and wait for him.

“I waited and he drove me to the DSS himself and insisted that I should be questioned and released to him the same day and that was what happened. So, who is my friend? Who is my confidant?

Meanwhile, Amaechi had described himself as a very loyal person. According to the former governor of Rivers true loyalty is tested when situations do not favour the person in question.

The minister said this during a consultative meeting at the Rivers APC secretariat. 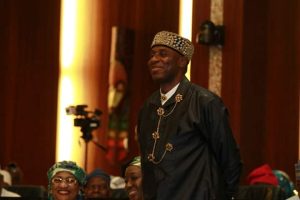