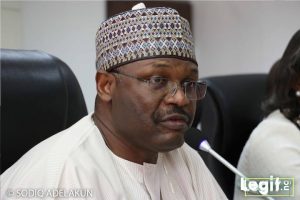 The independent national electoral commission (INEC) has warned political parties to be cautious of the timeframe allotted to them to conclude their primaries INEC chairman, Mahmood Yakubu reiterated that the timetable will not be adjusted as the stipulated dates are already fixed Nigeria’s electoral body also noted that the preparation of the election timetable was in accordance with the constitution.

Nigeria’s electoral body, the independent national electoral commission (INEC) says there will be no room to reschedule the forthcoming general elections in 2023, This Day newspaper reported. The update was made known by the electoral body’s chairman, information and voter education committee, Mr. Festus Okoye who spoke to journalists on Monday, May 16.

Similarly, the electoral body through its national commissioner, Kunle Ajayi prompted political parties to be aware of the stipulated deadline to conclude their various primary elections which will elapse on Friday, June 3.

He revealed that the commission’s chairman, Prof. Mahmood Yakubu had reiterated that the schedule is fixed and cannot be tampered with. He said: “The political parties are proceeding with their congresses and primaries. The commission will not tamper with its fixtures, as doing so will affect other activities and constitutionally-circumscribed timelines. “Certainty is key to planning, and the commission is committed to its timelines. Political parties must brace up to the challenges posed by the Electoral Act 2022.

Okoye said judging by the number of efforts put in in the pre-preparation stages in the build-up to the 2023 polls, it will only be arbitrary to tamper with the already stipulated schedule. He said: “INEC is preparing for Ekiti and Osun governorship elections as well as 18 by-elections, while party primaries is a small subset of work of the commission. “The commission is engaged in procurement of sensitive and non-sensitive materials, and we will assess and renovate our state and local government offices.

“INEC will also receive, print, and display thousands of nomination forms. Moreover, we have trained and deployed hundreds of monitors for the congresses and primaries”