Controversial founder of Omega Fire Ministries, Apostle Johnson Suleiman, is currently enmeshed in an adultery scandal as a Canadian based Nigerian woman, Stephanie Otobo, has filed a N500 million lawsuit against him for allegedly getting her pregnant and dumping her. This is according to a letter sent to the IG of police by Festus Keyamo chambers on behalf of Stephanie

According to Court papers, Suleiman and Stephanie met in 2016 in Canada and allegedly began a secret affair. She claimed he informed her of his plan to divorce his wife, Lizzy, to marry her and have more male children.

Stephanie, who is a musician with stage name Kimora, left her base in Canada to Nigeria so she can be close to her pastor/secret lover. She says during sex, Pastor Suleiman would lick her all over her body including her vagina and had suggested that they have group sex with her friends. Stephanie says he got her detained after she told him she was pregnant.

She says she has naked photos as well as screenshots of raunchy messages they sent to themselves.
Stephanie claims she became a member of the Apostle Suleiman’s church, and followed him every where. He sent her money regularly according to her and she claims he asked her to get pregnant.

But when she informed him in September 2016 that she was pregnant in a hotel in Ikeja, Stephanie claims Apostle Suleman flew into a rage and asked her to abort it, fearing scandal.

Stephanie claims that Pastor Suleiman gave her a concoction that made her bleed and he ended their relationship.

According to the story, Stephanie went to Warri and relayed the whole story to another pastor who recorded it and started using it to extort money from Suleman.

Stephanie said she returned to Canada afterwards but Apostle Suleman contacted her again, apologized and asked her to return to Nigeria. And when she returned to Nigeria last week, she claims he put money into her account and subsequently froze the account.

It was will Stephanie was trying to withdraw money from the account at a UBA bank after her ATM refused to work, that she was arrested on orders of Apostle Suleman who had reported her of being a blackmailer.

After her arrest, Stephanie filed a lawsuit against Apostle Suleman demanding to be paid N500million as damages for not honoring his promise to marry her and for harassment and threat to her life.

In the letter to the Inspector-General of Police, Keyamo Chambers said Stephanie was arrested on March 3 at a UBA branch in Anthony Village by heavily armed policemen from Federal Criminal Investigations Department (FCID), Alagbon. She’s since been in detention where her lawyers claim they have denied her access to them.

Keyamo Chambers has given Suleman a 7-day ultimatum to release Stephanie, meet their demands or be dragged to court

Below is the court papers filed on behalf of Stephanie at Festus Keyamo Chambers. 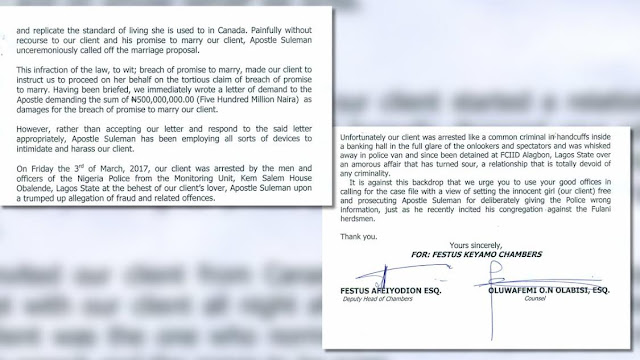 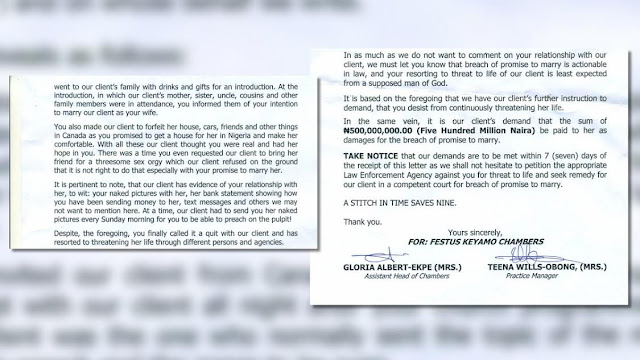