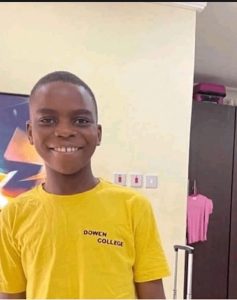 No arrests have been made following the death of Sylvester, according to CSP Adekunle Ajisebutu, the state police command’s spokesperson.

The police has given an update following the tragic death of Sylvester Oromoni.

According to the police, no arrest has been made yet.

Recall that Oromoni, a 12-year-old pupil of Dowen College in Lekki, Lagos died after being attacked by fellow students.

Today, December 6, the school administration will receive an official letter of invitation, the police has also revealed.

Ajisebutu said the command has initiated an investigation into the death of Sylvester Oromoni in a statement released on Saturday.

Despite the fact that the case had not been officially reported to the Force, he stated they had begun an investigation.