Controversial Islamic cleric, Sheikh Ahmad Gumi, on Saturday, asked the All Progressives Congress-led regime of the President, Major General Muhammadu Buhari (retd.), to declare a state of emergency on the nation’s health sector.

According to Gumi, the health sector across the country had collapsed as the general hospitals were now mere consulting centres.

The cleric called on Nigerian leaders to fear God and ensure that the state of the nation’s hospitals got a facelift from what it was at the moment.

Gumi stated this as he led other Muslim faithful on a visit to two major state-owned hospitals in Kaduna State capital shortly after the annual Ramadan preaching session which was held at Sultan Bello Mosque, Kaduna, on Saturday.

Meanwhile, Gumi was reported to have floated an advocacy group known as Nomadic Rights Concern to fight for the rights of Fulani herders.

Gumi, while announcing the formation of the Nomadic Rights Concern, said it would bring attention to the abuses and violations of rights of Fulani herders across the country.

The cleric said, “We found it worthwhile to establish Nomadic Rights Concern to be headed by Prof. Umar Labbo. NORIC is supposed to be a channel whereby Nomads will have their complaints and agitation addressed to the right authorities.

“Many have complaints about the loss of family members. Others are in the prisons of security apparatus for many years without offence and trial in a competent court of justice.

“The organisation was established to address these fallouts, hopefully, nomads will follow the civil ways in addressing their grievances away from violence. It’s said that violence is the language of the unheard.”

The hospitals visited, according to Malam Tukur Mamu (Dan-Iyan Fika), Median Consultant to the cleric, were Barau Dikko Specialist Hospital in the metropolis and the Gwamna Awwan General Hospital in the southern part of the state.

Gumi lamented that the visit had exposed him to the enormous challenges and vulnerable patients and their relatives faced in the country “where virtually everything has collapsed despite the increasing number of millionaires that mostly earned such favours/money through the government at all levels and using all forms of corrupt tendencies to accumulate at the expense of the suffering masses.”

Specifically, Gumi described the situation of the patients in the two major hospitals as “pathetic and indicting” on the part of the government of the day.

It said, “The visit had exposed Sheikh Gumi to the enormous challenges vulnerable patients and their relatives are facing in a society where virtually everything has collapsed despite the increasing number of millionaires that mostly earned such favours/money through the government at all levels and using all forms of corrupt tendencies to accumulate at the expense of the suffering masses.

“Sheikh Gumi got a first hand knowledge about increasing number of children, including infants, mostly that are dying due to preventable and treatable sicknesses such as Malaria and Typhoid fever.

“Greater number of the patients Sheikh Gumi saw did not even have money to feed themselves not to talk of affording medical expenses even on severe cases of emergency.”

Gumi also expressed concern that emergency cases at the government owned hospitals didn’t receive the desired attention, while “critical medical evaluations and tests that were supposed to be done immediately and the result be out on time (for patients that have the resources to pay) were being delayed to as much as one and two weeks, while decisions in case of patients that required emergency surgery, etc. were being unnecessarily delayed leading to deaths of patients in many occasions according to the testimony of the helpless patients.”

According to Gumi, it is unbelievable that “this is the country that has many billionaires, most of them accumulating such wealth through undue favours from the government or as proceeds of corruption through appointments or contracts.”

He offered cash gifts and words of consolation to the patients and their relatives. 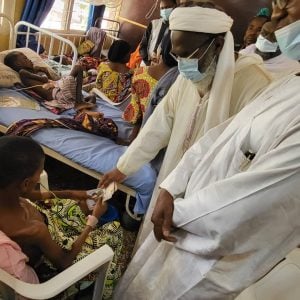 He urged governments at all levels to provide more facilities in public hospitals, “make doctors accountable and responsive and provide a means of taking care of the hospital bills of vulnerable patients, especially those on critical condition and on emergency cases.”

He lamented a situation where millions would be wasted on chartered aircrafts to attend wedding ceremonies, unnecessary events or attending children graduation abroad or wasting money on “Umrah jamboree at a time there are more important things to do that will please Allah more which is more rewarding.”

Gumi then “called on both federal and state governments to declare emergency in the Nigerian health sector.”