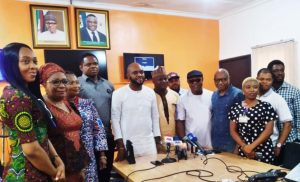 A businessman and philanthropist, Ben Akak, has declared his intention to run for governor of Cross River state, with the aim of deepening the job creation efforts of the incumbent governor, Ben Ayade.

The engineer, who addressed Government House Press shortly after holding consultations with Ayade, promised that he would deliver if elected governor of the state.

This was contained in a statement made available to The PUNCH on Tuesday.

Akak said, “I love Cross River State. I’m very passionate about the state. I think my destiny is tied to this state. All my businesses and all my investments are here in Cross River. Everything is here, so there is no way I will not want the state to work because if Cross River state goes down, I go down too.”

The aspirant, a member of the All Progressives Congress, described his youthful age as being in tandem with the Cross River tradition as regards the governorship seat.

“You know, Cross River State has been noted for producing very young leaders. The man who laid the foundation for our state, General U. J. Esuene was 37 when he became the military administrator, Brigadier-General Dan Patrick Archibong was 38 when he become military governor, Clement Ebri was 38/39, Donald Duke celebrated his 40th birthday as a governor, Governor Liyel Imoke and our beloved father, Ayade became governors at young ages.

“So, Cross River State has been noted for producing young leaders, I’m not going to be the first. It’s just that ours is going to be unique because it will be a transition from Ben to Ben”, he concluded.